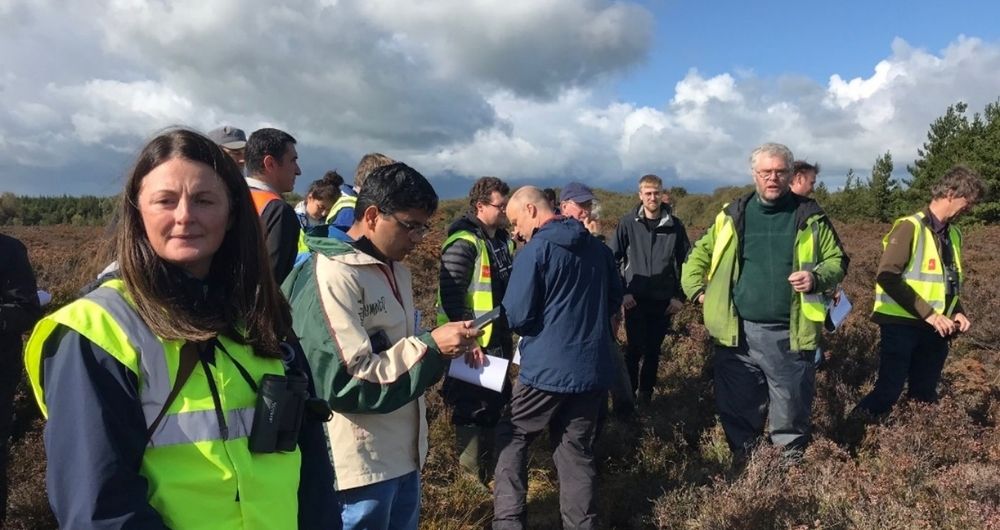 The GP3 campaign is supported by the United Nations Environment Programme’s Global Peatlands Initiative. Dianna Kopansky, Global Peatlands Coordinator has recognized the initiative by Bord na Móna (Irish Peat Board) to restore damaged peatlands as part of an overall plan to restore more than 50,000 hectares of Irish peatlands, saving millions of tonnes of Carbon, massively improving Biodiversity and boosting the Irish rural economy, in the count down to the UN Climate Change Conference (UNFCCC COP26) in Glasgow UK later this year.

Restoration work in Ireland is supported by the United Nations Environment Programme’s Global Peatlands Initiative and under its GP3 campaign, Dianna Kopansky, Global Peatlands Coordinator said: “Linking up to raise awareness of the potential of healthy peatlands for climate action, nature protection and our overall well-being is super important.”

Ó Brolcháin says, “The national effort by Bord na Móna, Coillte, the National Parks and Wildlife Service, 3rd Level Colleges, Farmers and Local Community Groups among others to restore c50,000 hectares of damaged peatland in Ireland has been described as the largest peatland restoration project ever undertaken in Europe”.

“Bord na Móna has embraced the role of poacher turned gamekeeper in alignment with the EU Green Deal just transition mechanism. In a turnaround in line with the latest global scientific evidence, they will be a leader in Ireland’s efforts to reduce Greenhouse Gas emissions and to improve biodiversity as part of the United Nations Decade on Ecosystem Restoration 2021-2030 and in line with the UN Sustainable Development Goals”.

Bord na Móna, originally the Turf Development Board (TDB) was established by the Irish State in 1934 and was transformed into Bord na Móna in 1946. It was established to develop Ireland’s peat resources for the economic benefit of the State. Initially the company produced sod peat and later changed to milled peat production. The peat was used to generate electricity, manufacture peat briquettes for home heating and to supply the Horticulture industry with peat based compost. However, scientific knowledge has changed this dynamic completely and because of climate change and biodiversity loss there is a clear need to restore the most efficient carbon sink in the world as peatlands account for only 3% (circa 4 million KM2) of the total global land area while they contain more than 30% of all global soil carbon weighing in at roughly 500 billion metric tonnes.

Ó Brolcháin says, “Restoration of Peatlands presents an opportunity to reduce GHG emissions by up to 5% globally, with a considerably greater potential impact in Ireland. This could be of great benefit to rural Ireland and the farming community if handled correctly. In fact this is probably the single biggest opportunity Ireland has to reduce emissions quickly, as peatland covers about one fifth of the land area. This is hugely significant for Ireland as land which was once seen as bogland is now being recognised as a major national asset. Many people are very surprised to hear that a hectare of peatland typically holds four times as much carbon as a hectare of tropical rain forest. Peatland will become more and more important and indeed more and more valuable as we head towards 2050 and our net zero carbon target”.

Kopansky said, “Peatlands are a neglected ecosystem and by profiling the incredible peatlands restoration efforts across the globe we hope to awaken opportunities and inspire action. It brings me great hope for us to reach the climate goals when I see stakeholders moving away from peatland degradation and extractive practices like harvesting peat for use in horticulture or for fuel. More industry partners should follow Bord na Móna’s long term thinking and transition their business away from destruction and toward restoration for the health of our people and the planet on which we depend. Peatland conservationists from around the world are coming together to share their stories about the work they do and the work that needs to be completed to fight climate change during the Decade of Ecosystem Restoration which started this year.”

Head of Land and Habitats at Bord na Móna, Ger Breen said: “This is the most exciting time to be working for Bord na Móna. Not only is the company making nationally significant contributions in the areas of recycling and renewable energy development. We are also accelerating our work repairing and revitalising the peatlands in our care. This work across c33,000 hectares of our land, will deliver a broad spectrum of climate action, biodiversity and environmental health benefits to the people of Ireland. It will keep over 100m tonnes of carbon in the ground and help sequester millions more. As these peatlands revive they will also quickly become home to thousands of native plant, insect, animal and bird species. As this happens, they will again become places of great natural beauty for people to enjoy and appreciate. We are delighted to be working with such a broad range of people, inside and outside the company, who love Irish peatlands as we deliver this immensely important project”.

Malcolm Noonan the Minister responsible for the National Parks and Wildlife Service said at a recent Care Peat seminar: “We are on the cusp of the new UN Decade on Ecosystem Restoration, and in the year when we have seen a new Climate Action Bill for Ireland, the EU Biodiversity Strategy 2030 and EU Green Deal. A lot is happening with many positive measures being taken for the conservation and restoration of habitats and species in Ireland and Europe. There’s no doubt that we have a huge challenge ahead, but we can do this collaboratively. I think there is great will, determination, skills and expertise, from the state agencies, the community and voluntary sector, our farmers and all our supporting organisations to bring about a real transformation in our peatland strategy”.

Coillte which manages c440,000 hectares of land (mainly for forestry), is also playing its part. While Bord na Móna now manages c80,000 hectares of peatland in Ireland, Coillte manages nearly 3 times that amount with c232,500 hectares of peatland under their care. Coillte nature is setting out to remove inappropriate conifer plantations from blanket bogs in the West of Ireland as part of the Wild Western Peatlands Project. Their director Ciarán Fallon said; “These areas were planted to create rural employment at a time when the importance of peatlands for carbon storage and biodiversity was not well understood. The Wild Western Peatlands project will allow us to rehabilitate a rare habitat of international importance. Learnings from this project will help us to develop a range of solutions for rehabilitating other similar areas”.

Dr Shane Mc Guinness, Development Officer for the Community Wetlands Forum in Ireland, said “peatland restoration under the just transition mechanism requires inclusion of the communities who live beside, protect, understand and wisely use them. The Community Wetlands Forum does precisely this, by supporting the community-led protection, management and wise use of Ireland’s wetlands. We provide a network for 25+ community groups across Ireland to share knowledge, ideas, research and best practice. Fundamentally, our vision is a society where wetlands are valued by local communities and community engagement is respectfully seen as a means of protecting and managing wetlands for present and future generations. The scalable rehabilitation of vast swathes of Ireland’s formerly mined peatlands by Bord na Móna is admirable and could present a powerful opportunity to engage with surrounding communities, by recognising the economic, amenity, cultural and wellbeing benefits of these areas, and ensuring a truly just transition away from peat as a fuel and the historical employment in mining it”.

The increased awareness of the multiple benefits peatlands ecosystems provide are not lost with the research community. “There are currently over a dozen different peatland-related research projects within Ireland. These projects are linking with local communities, farmers, regional & national authorities, and other researcher in Ireland and across the globe to further
increase our knowledge of those the benefits and how we can best manage these resources for the future” says NUI Galway researcher Dr Terry Morley.