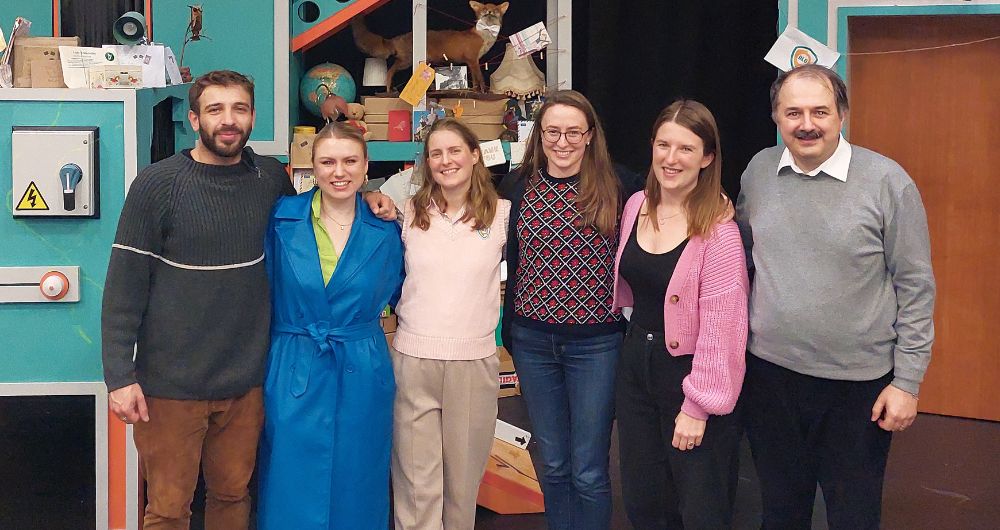 You may have seen a recent article on this website and across social media advertising an interesting theatrical event. Insight researchers were providing olfaction enhancement to a play called The Dead Letter Office by Mary-Lou McCarthy. As part of the work of Traction, the EU project that brought opera into prisons, they devised and delivered a scent-scape for the play. Professor Gabriel-Miro Muntean (pictured on the right with the cast and production crew) attended the play in the Civic Theatre last night. He writes his account of it below:

The play was excellent, the sets were inspiring, the actors were exceptional and the audience loved the play. The many children in the audience were thrilled and delighted. They engaged with the narrative to the point that they gave the main characters suggestions as they watched.

The play shared a great message of love for good, moving slowly from dedication to work, to appreciation for people and their lives and everything about them. The play advocated for inclusion. The audience discovered that people are not that different, that despite various backgrounds or superficial aspects, they share common aspirations and passions which can bring them closer for everybody’s benefit.

At the end of the performance, the audience could ask questions, see the set and chat with the actors and production team. The time was too short to accommodate all the interested young audience questions. In short a great success.

The researchers from DCU Performance Engineering Lab and Insight SFI Research Centre for Data Analytics supported the show with multiple remote operated olfaction devices which released smell in synch with the content of the play. For instance when one of the main characters, an immigrant coming from Syria, opens a bag with spices from his own country, the olfaction devices released a relevant smell or when the actors ate cookies on the stage, a cookie smell was released.

I, along with DCU researchers Dr. Anderson Simiscuka and Dr. Mohammed Togou, have performed research for many years looking at ways to enhance viewer experience with multi-sensorial stimuli, but our tests were all done in the DCU lab. This is for the first time this technology was deployed in a real show, and audiences including children from many schools and the general public have benefited from an enhanced experience.

The technology was developed in part with the support of the European Union project TRACTION (https://www.traction-project.eu). The devices are produced by Inhalio which also supplies cartridges with different smells. We have worked this year with the Inhalio engineers to adapt the devices to enable their remote wireless control, making them deployable in a real life setting and we tested their functionality in the summer in the lab using subjective tests with real people to assess and quantify the benefits. Finally the devicees were used in The Dead Letter Office – the olfaction-enhanced play by Mary-Lou McCarthy in Cork (The Everyman) and Dublin (The Civic) for multiple shows.

So far students from multiple Cork schools have attended, including Scoil na nÓg, Bishopstown Community School, Ballyhass National School, Gaelscoil Chorain and Scoil Bernadette. The show runs in Dublin at The Civic Tallaght between 26th-28th October 2022. You can read more about it here.