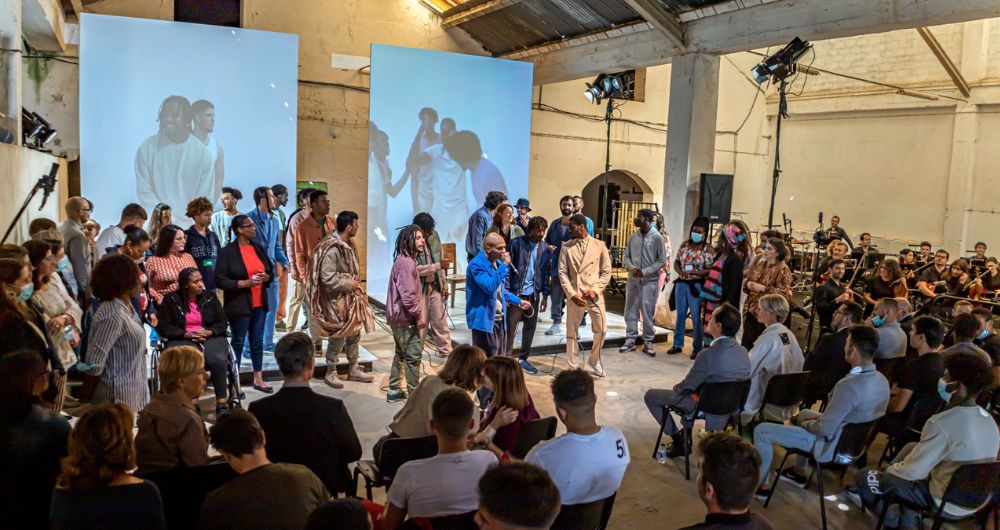 TRACTION is a European project that aims to use technological solutions to increase access to and engagement with opera for communities that have been traditionally excluded from the artform. Below is an extraordinary first hand account of a performance (pictured above) of a co-created opera entitled Time (As we are), which was performed in Portugal’s Leiria Prison this month, written by Professor Gabriel-Miro Muntean

As partners in the EU-funded project TRACTION, Irish researchers from the Insight SFI Research Centre for Data Analytics and the DCU Performance Engineering Lab have worked with their other TRACTION consortium colleagues to design innovative technologies to enable not only remote consumption of artistic performances, but even their co-creation.

One of the three TRACTION project trials was led by SAMP Portugal and was staged in a prison for young inmates from Leiria. The original project trial idea is very ambitious, as its goal is to support rehabilitation of offenders among the young inmates by engaging them in an opera co-creation process. To date, under the coordination of Professor Gabriel-Miro Muntean, the DCU team (Mohammed, Anderson and Rohit) has contributed to the creation of technologies for the Co-Creation Stage, a state-of-the-art technical solution that enables both remote and direct participation of artists in an opera show.

On the artistic front, the opera was co-created under the expert direction of SAMP’s leader Paulo Lameiro and of cultural expert Francois Matarasso. Composers, librettists, directors, the big orchestra of the Gulbenkian Foundation and local opera artists have worked with the inmates not to adapt an existing well-known work, as it is often the case, but to create a new innovative opera and blend in the individual talent and TRACTION-designed technology. Many months of work were put in by all, including by the excellent SAMP team members David, Bruno, Ana, Rachel, Ruben and Hugo to prepare properly for the day of the trial.

And the big trial day came in early June 2022. Everybody was ready: the artists, TRACTION partners, representatives of the local authorities, prison guards and, most importantly, inmates and their families. The show was by them and about them. Along with the TRACTION researchers and the other guests, I entered the Leiria prison, whose brick buildings looked from outside like an empty old factory. Paulo welcomed us with a long walk with sets and images of past shows: Juliet’s balcony, a famous chair, some dresses, many pictures and a candle in memory of a very young artist inmate who surely would have very much wanted to be with his colleagues if his fate was different. The main stage was set in a former prison workshop. A second stage was in the Mozart Pavillion, a specially adapted room elsewhere on site, where another group of inmates performed. The artists, most of them inmates, were nervous and so were the TRACTION partners, under the coordination of Dr. Mikel Zorrilla (Vicomtech Spain). The members of the orchestra polished their instruments, making them shine even more. A rebel sun ray found a way down through the roof to the face of a mother sitting nervous in the audience. A very young boy holding tight his teddy bear looked curiously around. Only the two big white walls on the main stage were waiting patiently. The show started abruptly with waves of sounds, gestures and body movements. I was impressed by the outstanding voices of the opera singers: powerful, but touching. I recognized some instruments, then I was surprised by the remote presence of the artists in the Mozart Pavillion, projected onto the back walls of the stage. They looked like they were among us, sharing action and music and lots of feelings. A visiting mother met her son and tears fell. A group of inmate artists changed the rhythm by playing contemporary music and I could see joy in their eyes. And happiness while receiving standing ovations and flowers. Well deserved. Artists and technologists, parents and sons, opera singers and instrumentalists, inmates and guards together. Months of efforts culminated in a magic moment. Outstanding, but ephemeral.

On my way out the prison I was thinking and I realized that effort put in ant the value derived was not so much in reaching the goal, as in the journey itself. Diverse people working together towards a positive goal, making them feel important, appreciated for something they did. This can change lives. I stopped to look back at the brick prison buildings from distance. The site still looks like an old factory built on top of a hill, but it is not empty. It is full of people with hopes for the future.
EU-funded TRACTION PROJECT: https://www.traction-project.eu/