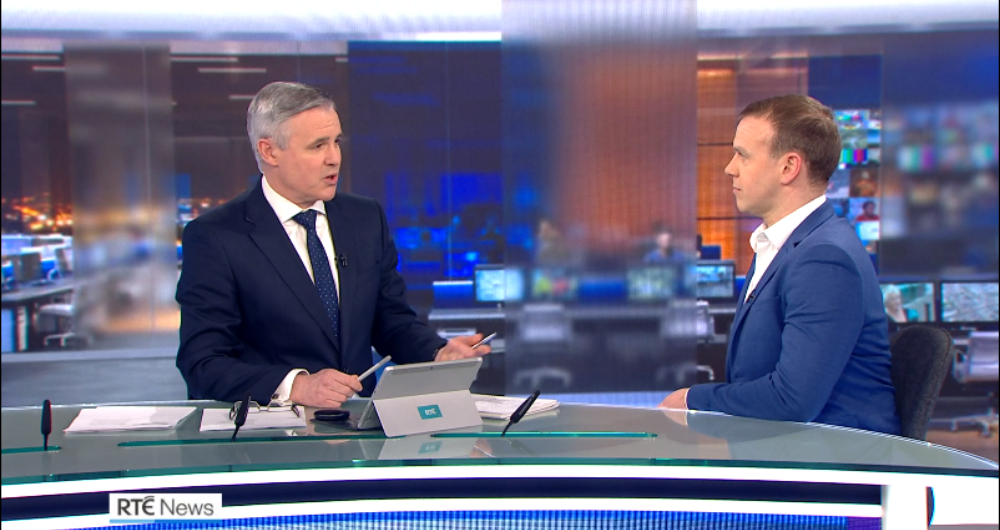 Initial results from Insight’s Moving Well Being Well project are in and they have provoked a wide ranging discussion about children’s health and fitness in Ireland. Pictured left is Insight’s Dr Stephen Behan explaining the results on RTE’s Six One News.

Insight researchers, in collaboration with researchers in the School of Health and Human performance, carried out an all Ireland study of over two thousand primary school children on the island of Ireland, and have found that one in four cannot run properly; one in two cannot kick a ball properly; and less than one in every five can throw a ball.

The findings also noted that the skills development of children with regards to running, jumping, catching and kicking (movements that are categorised as fundamental movement skills (FMS)), plateau and stop progressing at the age of ten. Existing research shows that mastery of these basic skills is achievable by 8 years of age.

This milestone is considered significant as in the case of children not reaching it, it can result in young people exhibiting an aversion to engaging in sports and physical activity, particularly in their teenage years.

There was a notable difference between boys and girls in certain skills with boys displaying a greater proficiency in ball skills such as throwing and catching, while girls scored higher than boys in skills requiring control of the body such as balance and skipping. The findings are interesting in the context of the activities pursued by girls and boys, with the former often taking up gymnastics, dance and the latter taking part in rugby and soccer. Both boys and girls have a huge involvement in Gaelic Games overall.

The Moving Well-Being Well project is assessing the current situation in Ireland in relation to this and developing interventions to improve children’s fitness, wellbeing, physical competence and confidence in a child-centered manner.

The first set of published findings from Moving Well-Being Well are significant in terms of identifying the maturation of FMS and also pivotal points in the context of children mastering and (or as is the case) not mastering FMS. This in turn can underpin their future participation and motivation in sport and physical activity. Those findings are currently being used to develop an intervention in primary school targeting all elements of physical literacy where all actors around the children are involved – teachers, coaches and parents. This holistic approach will support and enhance the development of the core components of physical literacy: physical competence, motivation and confidence as well as childrens’ knowledge and understanding of the benefits and importance of physical activity for life.

The findings have been published in the Journal of Sports Sciences and have emerged from data gathered as part of a wider research project Moving Well-Being Well, a major collaboration between the Insight SFI Research Centre for Data Analytics at DCU, the School of Health and Human Performance at DCU, the GAA (Gaelic Games Athletic Association) and Dublin GAA to examine the physical literacy of over 2,000 children, aged 5-12 in primary schools nationwide.

“These results are the most comprehensive of its kind ever produced in Ireland, and highlight the poor levels of basic skills in Irish children. If children don’t have a solid foundation of basic movement skills, how can we expect them to do more complex skills as part of organised sport? This solid foundation is what allows children to take part in a multitude of physical activities, and to feel confident in trying new things. There is a lot of attention on childhood obesity and low participation rates in sport – a focus on the fundamental movement skills in young children could be key in tackling both”.

“These findings highlight core issues that teachers, parents and coaches need to address. If the current generation of children can’t throw and catch in basic situations, why would they choose to play if they aren’t good at it? “It is not fun” that’s what they say, and if it is not fun they won’t play. Develop confidence and competence for our children then they won’t stop playing and that’s what you want. Children at play for as long as possible every day of the year”.

“It’s well known that if you can’t measure something then you can’t improve it. This unique study has allowed us to measure and therefore understand current levels of mastery of fundamental movement skills in children, an important aspect of their overall development. This improved understanding helps us identify where improvements are needed and this allows us to develop strategies to ensure this improvement takes place. It’s a great example of how the power of data analytics can allow us to positively impact society on a national scale”.

“We are learning more and more about the movement deficiencies of our children and young people in Ireland. It is no surprise that the 2018 follow up of the national CSPPA study shows a decline in physical activity participation rates of children by a further 2% since 2010- at primary school less than one in every 5 is active enough to sustain health. Simply put it is time now for action. We need to focus our attention nationally on developing physical literacy capacities and capabilities in our children and young people. We need to help them develop the tools needed to enable them to live long, healthy and active lives. At the moment we are failing our kids badly, and that is a very sad situation”.

Participants were recruited from 44 schools across 12 counties (56% rural and 44% urban) taking into account all four provinces in Ireland and Northern Ireland.

Previous research has shown that children can master all FMS skills by the age of 8. However, this most recent research finding shows that a large proportion of Irish children have not mastered FMS by age 10. At this stage, children could become self-conscious in the company of their peers when participating in physical activities/sports that require these skills, and in turn are likely to disengage, leading to a decrease in physical activity.

Participants were also tested on their balance, consisting of two tasks; walking forward along a straight line and standing on one leg on a balance beam with eyes open. These tests were based on outcome of performance.

Any cookies that may not be particularly necessary for the website to function and is used specifically to collect user personal data via analytics, ads, other embedded contents are termed as non-necessary cookies. It is mandatory to procure user consent prior to running these cookies on your website.