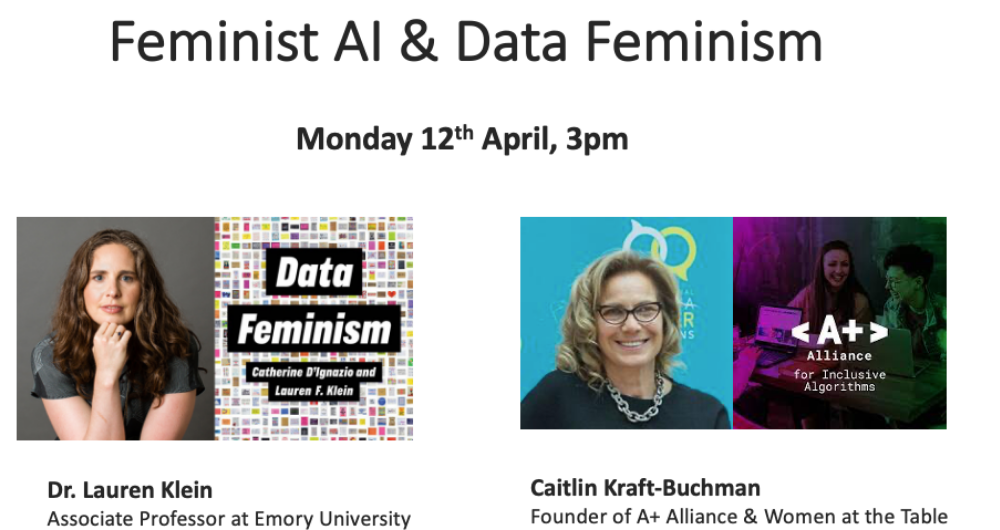 The topic of the meeting will be artificial intelligence, data and feminism and Dr. Lauren Klein from Emory University, author of Data Feminism and Catilin Kraft-Buchman, co-founder of the A+ Alliance will both speak.

Lauren Klein is an associate professor in the departments of English and Quantitative Theory & Methods at Emory University, where she also directs the Digital Humanities Lab. Before moving to Emory, she taught in the School of Literature, Media, and Communication at Georgia Tech. Klein works at the intersection of digital humanities, data science, and early American literature, with a research focus on issues of gender and race. She has designed platforms for exploring the contents of historical newspapers, modeled the invisible labor of women abolitionists, and recreated forgotten visualization schemes with fabric and addressable LEDs. In 2017, she was named one of the “rising stars in digital humanities” by Inside Higher Ed. She is the author of An Archive of Taste: Race and Eating in the Early United States (University of Minnesota Press, 2020) and, with Catherine D’Ignazio, Data Feminism (MIT Press, 2020). With Matthew K. Gold, she edits Debates in the Digital Humanities, a hybrid print-digital publication stream that explores debates in the field as they emerge. Her current project, Data by Design: An Interactive History of Data Visualization, 1786-1900, was recently funded by an NEH-Mellon Fellowship for Digital Publication.

Caitlin Kraft-Buchman is founder of the A+ Alliance and CEO/Founder of Women at the Table, a growing global CSO based in Geneva, Switzerland – and the first organization to focus on systems change in sectors that have key structural impact: economy, sustainability, democracy and governance, and technology. Caitlin founded and co-leads the new <A+> Alliance for Inclusive Algorithms with Ciudadania Inteligente, a global coalition focused on affirmative action for algorithms. <A+> is one of the leaders of the UN Women Generation Equality Action Coalition for Technology and Innovation for Gender Equality. She is founder of International Gender Champions (IGC) with hubs in Geneva, New York, Vienna, Nairobi, The Hague, and Paris, with 300+ Champion heads of organizations including the UN Secretary General, heads of UN-Habitat, UNHCR, ICRC, WTO, ILO, WHO, WIPO, ISO, Ambassadors, and Civil Society. She is responsible for IGC’s Trade Impact Group (Buenos Aires Declaration on Trade + Women’s Economic Empowerment, 2017); Disarmament Impact Group (nominated Arms Control Person/s of the Year, 2018); Standards Impact Group (Gender Responsive Standards Declaration, 2019).